One of the most popular series of posts on an old blog I had was Vintage Ad Fun, so I thought I’d resurrect it here for your amusement. The first installment is brought to you by the miracle that is Listerine. 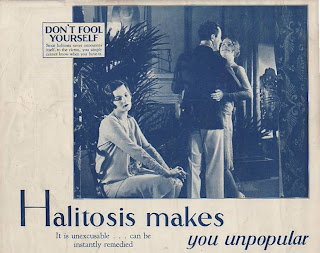 But don’t worry. You can instantly halt halitosis with Listerine.

In fact, the “pleasant-tasting germicide” is so powerful, it can combat a cold, dandruff, or perspiration, and it provides cool, refreshing exhilaration after a shave. 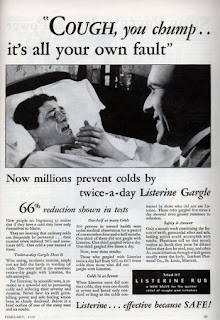 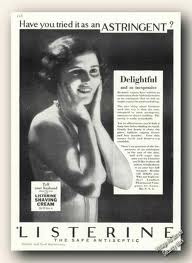 Perhaps most miraculous of all? It will help lonely women catch and keep a man!

Although some sources claim Listerine ad men invented the term “halitosis,” its origins date back to 1874, five years before a doctor from Missouri invented Listerine as a surgical antiseptic. Dentists began using it for oral care in 1895, and it was first sold over the counter in 1914.

But Listerine wasn’t going to sell itself. First the company had to tell America it had a problem; only then would the cure be indispensable.

The fun really started in the 1920s with the halitosis ad campaigns. 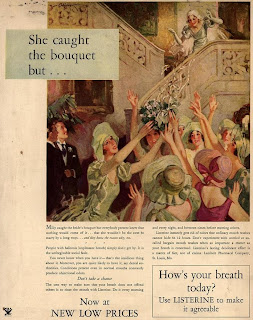 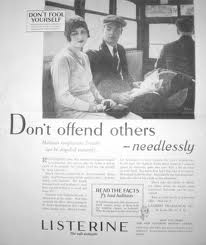 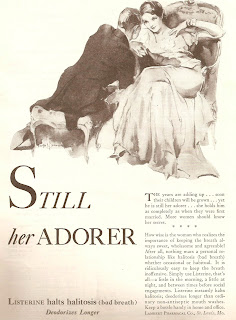 “How wise is the woman who realizes the importance of keeping the breath always sweet, wholesome and agreeable! After all, nothing mars a personal relationship like halitosis (bad breath) whether occasional or habitual.”
I love the word “wholesome” here, as if a woman’s breath implies something about her character.

Sales of Listerine skyrocketed. And what’s interesting–yet not surprising–about the halitosis angle is how all these ads appear to be aimed at women, and it’s not just because women did the shopping. There were ads targeting men too, but they took a different approach.

“Feel well and keep well” is very different message than threatening a woman with everlasting loneliness due to her breath. Basically, a man might end up temporarily sick or infected if he does not use Listerine, but a woman might fail to catch and/or keep a man forever.
Even worse, the man she thought she had might–GASP–leave her and marry her friend! 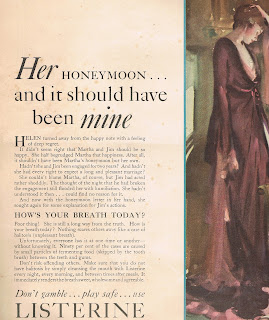 It’s bad enough when you don’t get asked to dance, but when your fiance of two years leaves you because of your breath…
Your mission is clear.
Gargle. The men will flock.