Speak Easy came out. People read it (wheee!) and loved it (I want to hug you!) and reviewed it (thank you!). I got to hear readers’ thoughts for the first time ever–readers who are not my family/friends/bartender.

And I discovered something. Well, a few things.

1) New Adult readers are reluctant to pick up up a non-contemporary romantic story.

2) Historical is a dusty word.

3) Once people DID pick up Speak Easy, they were surprised at how sexy and modern it felt, even though it was set during the 20s.

What’s a girl to do?

Since Speak Easy is my first book, I turned to bestselling authors who have more experience and asked advice–and because this community is so awesome, I got it. Here’s what they said…

Change your cover and your description. Make it clear it’s not your grandmother’s historical novel. It’s a hot smexy read and readers of contemporary New Adult will eat it up when they realize the historical setting only adds to the sexy feel.

So guess what I did?

And while I loved my pretty cover (and if you order the print version, you will still get that one), my sexy one makes me giddy like a Bombay Sapphire martini (extra dry, two olives, thanks).

Want to see it?

OK, just for you.

Because I’m all about giving in to temptation. 😉 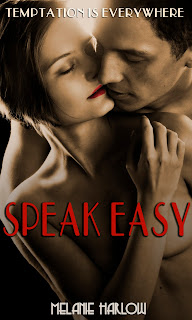 And here’s the new description…

**Warning** This is not your grandmother’s historical romance. If you’re looking for blushing maidens or proper gentlemen who ask permission to kiss the girl, this is not the book for you.

But if you like strong female heroines who take what they want and sexy dangerous men who can’t be trusted, look no further. If sizzling sexual tension and fast-paced action against a backdrop of Prohibition-era ambience sounds like your kind of cocktail—enter here. But beware…

Temptation is everywhere. And anything goes.

By day twenty-year-old Tiny O’Mara works for her father’s smalltime bootlegging operation, and by night she craves the roll-your-stockings-down lifestyle of a flapper—until her father is kidnapped by a mobster in Detroit’s exploding organized crime scene, and it’s Tiny who has to come up with the ten-thousand-dollar ransom…in one week.

Suddenly she’s thrust into an intoxicating underworld of greed, lust, lies, and betrayal.

Enzo DiFiore is the son of the mobster holding her father hostage, but his screen idol looks and dangerous charm leave her breathless. When the forbidden spark between them refuses to burn out, she tries to use their powerful chemistry to buy more time. And irritatingly handsome childhood pal Joey Lupo has the street smarts Tiny needs to make a quick ten grand, but he’s got his own agenda where gang rivalries are concerned.

Deciding whom to trust isn’t easy in a world where everyone wants something—be it booze, money, power, or sex—and no one cares what it takes to get it.

Now, are you ready for a little Monday morning sizzle?

Here’s an excerpt–an early scene between Tiny, the feisty heroine, and Enzo, her dangerous bad boy.

“Satisfied?” He set the phone down and raised his eyebrows at me.

“I guess.” At least I knew Daddy was still alive, and conscious enough to speak on the phone. My job now was to get the money. But even if I sold the twelve cases I’d pick up tomorrow night, I’d need to sell seventeen more to come up with five grand by Tuesday. It couldn’t be done—I needed more time. But what leverage did I have to bargain with? I looked at Enzo, my mind and heart racing.

“We should go. I promised to return you within twenty minutes.” Enzo gave me that slow smile, which made my belly go hollow. “And I do rather value those body parts your friend threatened.”

“Right.” I licked my lips as I walked to the door, and Enzo waited until I reached it before turning off the lamp. His silhouette came closer in the darkness, and my insides tightened.

Fear and some other untamable feeling buzzed through me. “No.”

“We still have five minutes.” I rushed forward and threw my arms around his neck, crushing my lips to his.

For a moment he was stunned; I heard his keys hit the floor. Then strong arms locked around my back, and his mouth opened wide over mine, his tongue lashing inside with deep, demanding strokes. My body ignited in a way I hadn’t anticipated. Keep your senses. This is just a ploy. You’re angry with him. Our mouths battled each other with such ferocity I couldn’t breathe, and I imagined the fire between us consuming all the oxygen in the room. He tasted like temptation—whisky and smoke.

Pressing my forearms against his shoulders, I jumped up and wrapped my legs around his waist. Enzo pushed my back up against the door, his hands slipping beneath my dress to the undersides of my legs, his fingers gripping the bare skin above my stockings. Gasping, I squeezed his torso between my thighs as his mouth traveled across my face and down my neck. His fingers edged inside the lace of my step-in, teasing the soft pink folds at my center while his tongue lingered in the hollow at the base of my throat. Something deep and powerful surged within me. Threading my fingers through his dark hair, I pulled his head back and we stared hard at each other before our mouths slammed together once more. He shifted my weight under one arm and found the side fasteners of my dress with the other.

Somehow, he undid seven hooks and eyes with one hand.

His fingers slipped inside my dress and pressed against the bare skin on my lower back. Then he swung me away from the door and moved to the desk, setting me on its edge with my dress bunched up around my hips. Standing between my knees, he ran his hands up my pale white thighs, which glowed in the dark above my stockings. My chest heaved with ragged breaths as he shrugged off his coat and loosened his tie. My hands itched to touch him, to travel under starched cotton and over hot skin, to reach low and feel exactly how he wanted me. To know for certain what he could to do to me, if I let him. For a moment, I forgot every circumstance that brought me here and nearly reached for the buttons on his trousers.

But just for a moment.

“Enzo,” I whispered instead, gripping the edge of the desk. “We can’t.”

He put his hands on my buttocks and pulled me flush against him. “You said we had five minutes.” He pressed the hard length of his cock between my legs.

Oh God, that feels so good. I struggled for control. “It’s been five minutes. And neither of us wants to get caught here.”