I’m ashamed of myself.

On Saturday I started Night Owl, hoping it would be bad. Really bad.

You see, I had something against the author. 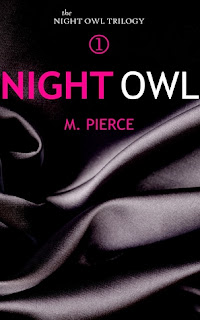 I didn’t know the author personally. In fact, I had never even heard of M. Pierce or Night Owl. But I was aggravated by something Pierce said in a blog post about the way authors price their ebooks.

And I was fist-clenching, teeth-gritting jealous.

This was an author who came out of nowhere with a debut novel that rocketed to the top ten in the Kindle store pretty fast. Reviews of Night Owl are amazing.

I was convinced M. Pierce was a pen name for an established author or an agent. One who had connections. One who had a built-in fan base. Or maybe a Big Name to blurb the book. In other words, M. Pierce wasn’t starting at the bottom, like me.

So I got the free sample on Kindle (yes, I’m cheap) and started reading, hoping that the writing would be bad, the editing shoddy, the smut recycled from every other alpha male book out there right now. Then, I reasoned, I would not feel so bad that I do not sell a million books a day. Because at least I know how to use punctuation.

I poured a glass of wine, gave a final harrumph, and started to read.

Two pages in, I was hooked. And furious.

How DARE Night Owl be so fucking good? How DARE M. Pierce write so well? How DARE the characters be so interesting, the setup so intriguing, the smut so hot?

I bought the book (99 cents on Amazon) and poured more wine.

As I read on, I was even more convinced that M. Pierce was a fake name for a big author who wanted to write erotica anonymously. The writing was too confident, too sharp, too unapologetic. Cocky, even–but in a good way. No fumbling, frilly prose or shifts in verb tense. No misuse of apostrophes. No excessive dialog tags choking the characters’ conversations.

The next morning, I stalked M. Pierce’s blog like a hawk, determined to figure out if he or she was really Stephen King. (Not gonna lie, that’s really what I thought.)

Imagine my surprise to discover it’s really just a fantastic, hard-working writer who wrote a good book that took off. And that M. Pierce is funny, honest, self-deprecating, and generous with advice to other indie authors.

I felt horrible. And guilty. So I wrote Pierce an email saying how much I was enjoying Night Owl and admitting that I’d hoped it wouldn’t be as good as everyone said it was. I even confessed my stalkerish behavior.

And then, AND THEN, to make me feel even worse, I get an awesome email back, and we’ve since struck up a nice conversation about writing and publishing and other random things.

I wanted to dislike the author and the book. Serves me right that they are both amazing.