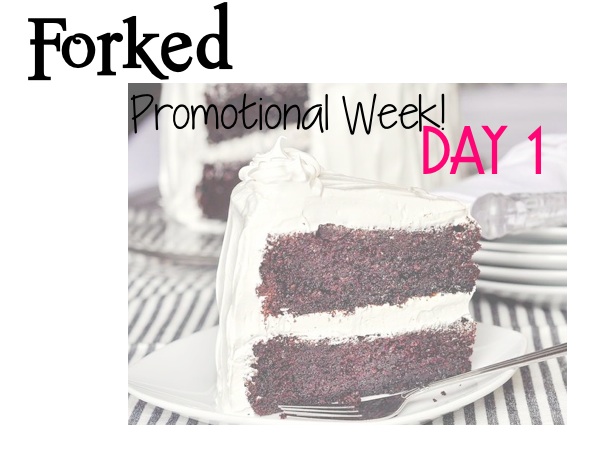 Welcome to Day 1 of pre-release-week shenanigans for FORKED!

Today’s course…the aperitif.  Something to whet your appetite.

Want to know what FORKED is all about? Here’s the summary on Goodreads.

But all you really need to think about is that one person in your past you could never say no to, the one that got away, the one that made you crazy…in all the right ways.

For Coco Thomas, his name is Nick Lupo. 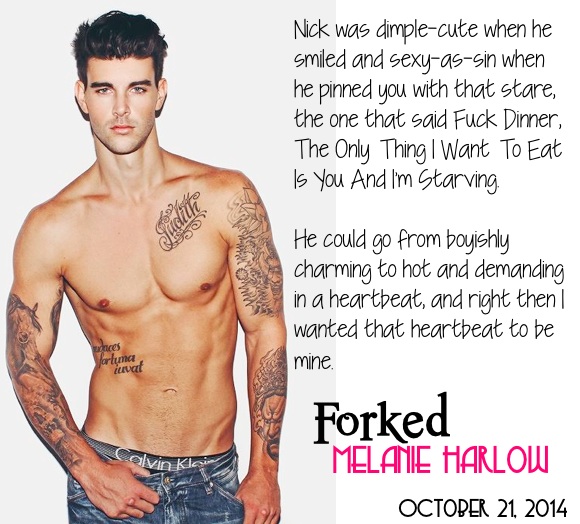 He smiled. “You totally want me to kiss you right now.”

Shrinking back, I slapped him on the shoulder. “I do not!”

“You did, you so did,” he said, laughing as he stood up. He tossed the iPad onto his bed. “You licked your lips.”

Steaming mad, I clenched my fists at my sides and trailed him down the steps and back into the kitchen. He was so fucking infuriating! “That doesn’t mean I wanted you to kiss me. Because I didn’t. I don’t.”

“Oh no?” He whirled around and grabbed me hard by the shoulders. His lips hovered over mine. “Then tell me not to kiss you,” he said, his breath warm and soft on my mouth. “Say it’s against the rules. Say you don’t want it.”

He was either going to take me the way I wanted to be taken or not at all. I wasn’t going to offer him a fucking invitation, not after what he’d done.

“I don’t want it.” The lie slid out through clenched teeth.

He paused before letting go of me. “Good. Because I don’t want it either.”

Before I could stop myself, my hand shot out and grabbed his crotch. Beneath his jeans, his cock was thick and hard and totally erect.

Satisfied with his awestruck expression, I removed my hand and turned to the ingredients lined up on the island. “Well, don’t just stand there. We’ve got a cake to bake, remember?”

“Coco.” He said my name with enough force to make me wonder if he was angry at what I’d done. I faced him again and saw his hands fisted at his sides. And there was something other than shock in his eyes. They were darker than they’d been a moment ago, making my nether regions tingle. And was it the oven making it so hot in here?

I felt for the counter behind me. “Yes, friend?”

Rushing toward me, he wrapped his hands tightly around my head. “Don’t.” Then he crushed his mouth against mine, igniting a fire within me that consumed any lingering doubts or desire to play the coquette. I threw my arms around him and molded my lips and body to his. Later we’d probably argue over who started this, but right now all I could think about was getting closer to him.

We kissed like it was the first time, like we were back in his truck and we couldn’t believe we’d just met, like we’d better get our fill of each other because such insane chemistry couldn’t possibly last—surely it would burn out as quickly as it sparked.

But God, God, it felt good.

“Nick,” I whispered as his mouth, that incredible, luscious mouth that had taught me so much about pleasure, moved down my throat. He closed his fingers in my hair, sending needles prickling across my scalp and down my spine. I tugged at the blue shirt, impatient to feel his skin against mine, to wrap myself around him, to get him inside me.

He dropped his arms and I shoved the shirt from his shoulders, but as it dropped to the floor, he did too, sinking to his knees in front of me. Breathing hard, I watched him slide his hands up the outsides of my thighs, pushing the dress to my hips. “Christ, this body,” he whispered, resting his forehead against my white lace panties. His hands flexed on my hips. “I’ve dreamed about this.”

“You have?” My fingers threaded through his thick dark hair.

“Yes. And this.” He kissed me through the lace. “And this.” He dragged the panties down to my knees. “And especially this.” He slid his tongue between my legs, which nearly buckled at the first firm, wet stroke.

At the second stroke, they began to tremble.

By the third, I wasn’t even sure I had legs.

“Fuck standing.” He yanked my underwear all the way down and I stepped out of them, holding onto his shoulders for balance. As he stood, he reached behind me and hitched my legs up around his hips, my dress riding all the way up to my waist. Our mouths and tongues collided, and I locked my ankles behind him. 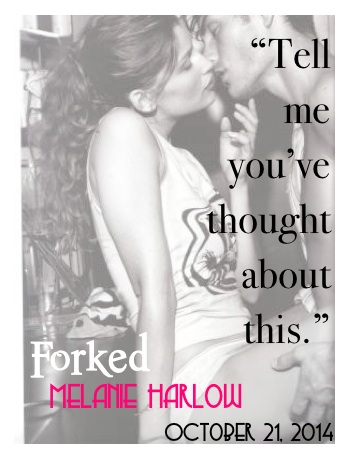 Go enter to win an ebook of FORKED on my Author Facebook page!

And stop by tomorrow if you can’t wait to experience Mia and Lucas’s wedding!

(As my friends will tell you, I’m a Spoilery Motherfucker. Can’t help it–too excited!)

⁣ I had such an amazing time at the Wild and Win

⁣ Book 3 in the Cloverleigh Farms Next Generatio

⁣ #whatshesaidwednesday⁣ ⁣ I walked down the