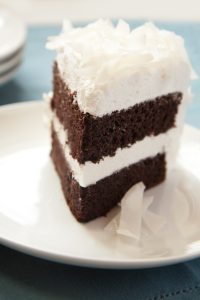 “Nick’s chocolate cake was the kind of delicious that would make even those annoying people who say ‘I’m not a dessert person trample’ old ladies and small children to get the last piece. The frosting—what the hell was in it? I’d watched him make it, hadn’t I? Was it vanilla? It tasted almost like a marshmallow but I hadn’t seen any marshmallows on the counter. And how did he get it to stiffen into those delightful little peaks that gave the texture a hint of a crunch?”

Nick is definitely a man who knows his way around the kitchen as well as he does around the bedroom. He can cook AND bake, which are definitely two different things (I can cook, but I am not a good baker. Ask my kids!).

The cake he makes for his grandmother in FORKED is actually a recipe my my family history, and it has kind of an interesting story behind it. 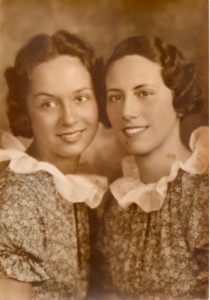 My grandmother, Betty, on the left and her older sister Margaret on the right, probably early 1930s.

During the 1920s, my grandmother’s sister Margaret traveled as a nanny with a wealthy family from Detroit up to their summer home in northern Michigan (what we MI folks call “up North”). The family also brought along other domestic workers including their cook, Mae.

The story goes that Mae guarded her recipes very closely–she wouldn’t share them with anyone–but on Margaret’s final night with the family before she returned to Detroit, Mae let her look through her recipes! “Mae’s Chocolate Cake” was the first one she went for.

My grandmother baked it for all her kids and grandkids on their birthdays, and I passed the recipe along to my 13-year-old daughter, who also loves to bake! (My mother came from the era of boxed cakes and I tend to take after her…)

But for those of you who like a challenge and a cake from scratch, here you go!

Put this mixture over boiling water and beat for 7 minutes (maybe 4 minutes with electric).**

Mix and put on cake immediately.

**This note cracks me up because originally they did not have electric mixers! She had a hand mixer, which I inherited along with her recipe book–lucky me! 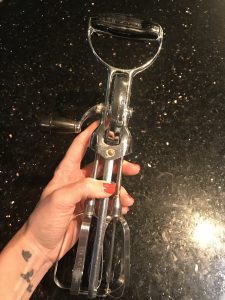