On the ride to Miles’s, I texted him.

Hey are you home?

Should I put on the gimp suit?

I snorted. That’s funny you’re funny I like you.

WTF are you drunk?

Cackling with glee, I tossed my phone back in my purse. Miles was hilarious. And cute and smart and sweet and he did have a thing for me, didn’t he? He wanted me, right? And when he saw me in my underwear, he wouldn’t be able to resist me. Not like Dan. “Asshole,” I muttered, right before another hiccup.

“Nothing.” Dang it, weren’t we there yet? I was coming out of my skin with excitement, bouncing around in the backseat like a puppy. This was the best plan ever!

Finally, the big old house came into view, and my heart beat quicker when I saw the light on in Miles’s bedroom window and the living room. “Thanks,” I yelled, jumping out of the car before it even came to a complete stop. I ran up the front steps and banged on the big wooden door. Miles pulled it open, and before he could say anything, I lunged for him, smashing my mouth against his and throwing my arms around his neck.

I knocked him backward about five feet, his heels hit the bottom step of the staircase, and he went down on his ass. I ended up straddling him, one knee on either side of his legs, which I thought was perfect. Congratulating myself on the excellent choreography, I wiggled my hips a little.

“Natalie…what the hell?” Miles tried to pry my face off his. His glasses had been knocked askew, but he looked absolutely delicious. His hair was messier than usual, and he hadn’t shaved in a few days, so his scruff was more like a beard. Dan was always clean-shaven, so kissing Miles felt totally different and thrilling. I’m kissing Miles! Finally! Nine years of suppressed desire bubbled to the surface.

“I want you to fuck me, Miles,” I breathed, right before a hiccup. “And you want to.”

“What?” His voice cracked, and he adjusted his glasses. “Whoa, whoa, whoa, crazypants, what is this?”

“This is fire.” I planted sloppy, drunken kisses across his face. “Hey, your beard is softer than I spected. Ex-spested. Expected.” I rubbed my face on his jaw.

Miles laughed uneasily, pressing me back by the shoulders. “What have you been drinking tonight, Jezebel?”

“Wine. And vodka.” Biting my lip, I reached beneath his t-shirt and ran my hands up his sides. “Take this off. I wanna see you naked.”

“Oh, Jesus.” He grabbed my wrists and held them away from his body. “What is with you? Where’s Dan?”

I pouted. “I don’t want to talk about that asshole.”

“Because. He doesn’t want to have sex with me.”

“No. But you do. You’re always talking about it.” I tried to lean over and kiss him again, but he held me off, so I bounced on him a little, riding him like a kid on a merry-go-round pony.

“For fuck’s sake, Natalie, will you stop it? Just wait a second.” Somehow, he got to his feet and set me on mine, then went behind me to shut the front door, which was still wide open. When he paused with his hand on the handle, probably trying to gather his wits, I launched myself at his back, wrapping my arms and legs around him.  Burying my face in the crook of his neck, I inhaled deeply.

“Mmm. You smell so good.” I licked him below the ear. “You taste good too.”

He groaned, grabbing me beneath the knees so I didn’t slide off, and walked into the dark living room. In front of a long, floral-upholstered couch, he turned around and sat down, trying to deposit me on it. “Get off.”

“No.” I clung even tighter. “Are we going to do it on your mother’s expensive couch? I don’t think she’d like that.”

“Jesus, Nat, the only place I’d take you tonight is the loony bin. Now let go so I can turn on the light and get you some water. Or a tranquilizer dart.”

“Come on, you want me,” I cooed. “I know you do.” I reached beneath his arms and ran my hands up and down his torso. He sighed exasperatedly, but he let me. Beneath his soft black t-shirt I felt the ridges of his abs and giggled. “I like your nice muscles. They’re hot. You’re hot stuff.” One of my hands strayed south to his belt. Putting my lips right by his ear, I whispered, “Why don’t you take off your pants, hot stuff?” This might have had a more seductive effect had I not punctuated it with a giant hiccup.

He shook his head. “You know, I’ve had a lot of fantasies about you. A lot. But they never went like this.”

“I was less daring?”

“You were less drunk.” He put his hand over my wrist. “Just how much alcohol have you had?”

“No, I won’t! Now why aren’t you being fun? Your whole life is all about sex and fun and now that I’m ready for some, you don’t want me?”

“Then what?” I succeeded in sliding my palm over his crotch, and I could not resist a squeal of delight when I felt the solid bulge there. “Ha! You do want me!” I hiccuped loudly in triumph. “You’re hard!”

“Of course I’m hard!” he snapped. “A hot girl has her legs wrapped around me and her hand on my junk. And you’re not wrong—I do want you. I’ve always wanted you.” Two seconds later, he had me on my back, my wrists pinned over my head. His face hovered right over mine, his breath warm on my lips. “But not like this.”

“Impaired.” His eyes searched mine. “Angry. Hurt. I don’t know what the fuck is going on with you and your asshole boyfriend, but I’d be the biggest dick in the world if I took advantage of you right now.”

“You wouldn’t be! I want this.” His knee was wedged between my legs, and I squeezed it with my thighs. God, that feels good. “I need this.”

Miles closed his eyes and exhaled. “Yes, you do. You need this and want this because you’re looking to get back at Dan. But I’m not interested in those terms.”

“Since when do you care what the terms are?” Angry that he’d fuck a stranger at the bar and had many times, I got in his face. “Casual sex is your thing, right single guy? Just treat me like another body or whatever.”

He laughed, brittle and quick. “That’s out of the question.”

“Why? Why is it OK for you to have sex with total strangers, even two at a time, and not me?”

“Fuck you, Miles! You’re a tease!” Panicking that he was going to reject me too and I’d die of frustration, I changed tactics, wiggling anxiously beneath him. “Look, I need this and want this because I haven’t had sex in months, and I’m all hot and bothered right now, and you’re gorgeous and you’re here and I like you, so just shut up and do it already, OK?”

“Oh, fuck. This is a nightmare.” He glanced toward the ceiling. “I hope you know the sacrifice I’m making here. You could at least give me a bestseller after this.”

“Miles, please. Please.” Lifting my head, I brushed my lips against his scruffy jaw, softening my approach. “Say yes.”

He groaned and looked down at me again. “I can’t. Because tomorrow, when you and Dan make up from whatever fight you’ve had, the way you always do, I’ll be the asshole that fucked you when your defenses were down, and you’ll never speak to me again.”

Oh, God. He really was saying no. Just like Dan had. I turned my head to the side so he wouldn’t see the tears of humiliation in my eyes.

He squeezed my wrists tights. “Look at me, Natalie. Look at me.”

His tone was so forceful, his grip on me so tight, I had to do as he asked.

“Believe me when I say I want nothing more right now than to tell my conscience to fuck off, take you upstairs, blindfold you, tie you up, and spank you for being such a bad girl. Then I’d spend the rest of the night making you come over and over and over again. I’d fuck you so hard you’d forget your own name, let alone your stupid boyfriend’s.” He lowered his lips to my ear. “But if and when I fuck you, it’s going to be about you and me, and no one else. Understand?”

Get the whole book here!! 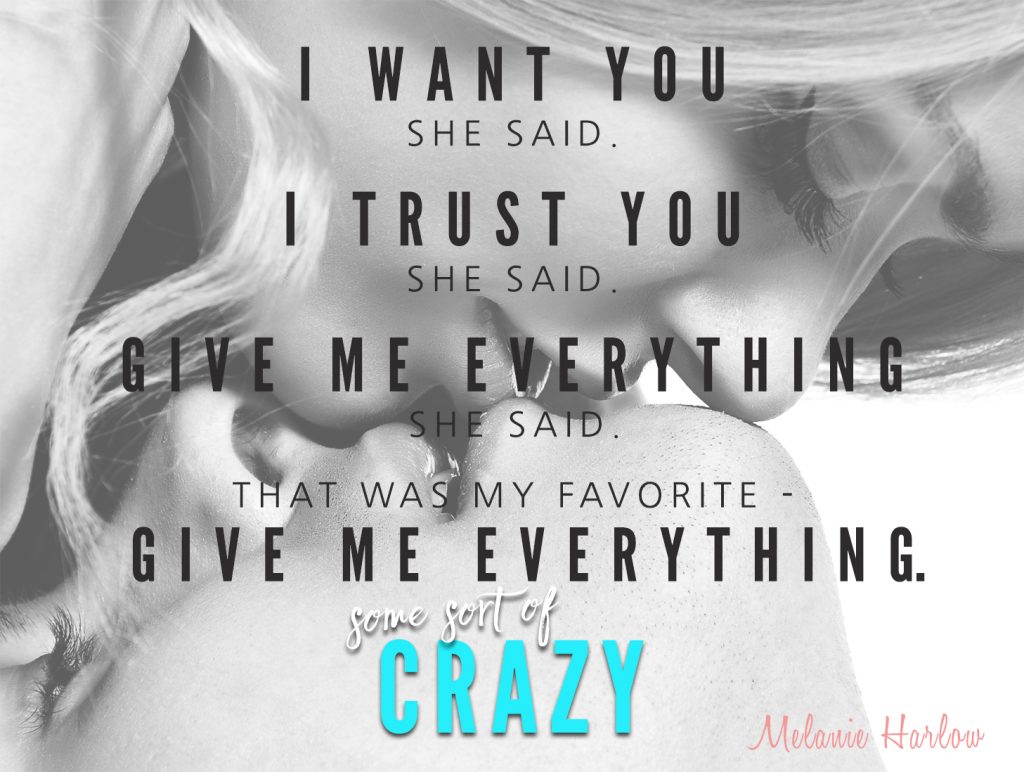