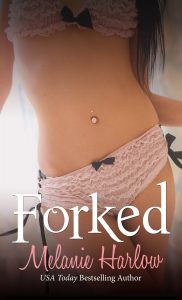 He didn’t move, and I didn’t either. I couldn’t. My stomach muscles were clenched so tight it almost hurt. He looked at my lips, so I licked them, let them fall open. Tipped my chin up, ever so slightly. Come on, Nick. Kiss me, already.

He smiled. “You totally want me to kiss you right now.”

Shrinking back, I slapped him on the shoulder. “I do not!”

“You did, you so did,” he said, laughing as he stood up. He tossed the iPad onto his bed. “You licked your lips.”

Steaming mad, I clenched my fists at my sides and trailed him down the steps and back into the kitchen. He was so fucking infuriating! “That doesn’t mean I wanted you to kiss me. Because I don’t.”

“Oh no?” He whirled around and grabbed me hard by the shoulders. His lips hovered over mine. “Then tell me not to kiss you,” he said, his breath warm and soft on my mouth. “Say it’s against the rules. Say you don’t want it.”

He was either going to take me the way I wanted to be taken or not at all. I wasn’t going to offer him a fucking invitation, not after what he’d done.

“I don’t want it.” The lie slid out through clenched teeth.

He paused before letting go of me. “Good. Because I don’t want it either.”

Before I could stop myself, my hand shot out and grabbed his crotch. Beneath his jeans, his cock was thick and hard and totally erect.

Satisfied with his awestruck expression, I removed my hand and turned to the ingredients lined up on the island. “Well, don’t just stand there. We’ve got a cake to bake, remember?”

“Coco.” He said my name with enough force to make me wonder if he was angry at what I’d done. I faced him again and saw his hands fisted at his sides. And there was something other than shock in his eyes. They were darker than they’d been a moment ago, making my nether regions tingle. And was it the oven making it so hot in here?

I felt for the counter behind me. “Yes, friend?”

Rushing toward me, he wrapped his hands tightly around my head. “Don’t.” Then he crushed his mouth against mine, igniting a fire within me that consumed any lingering doubts or desire to play the coquette. I threw my arms around him and molded my lips and body to his. Later we’d probably argue over who started this, but right now all I could think about was getting closer to him.

We kissed like it was the first time, like we were back in his truck and we couldn’t believe we’d just met, like we’d better get our fill of each other because such insane chemistry couldn’t possibly last—surely it would burn out as quickly as it sparked.

But God, God, it felt good.