It’s so hot I have to show it to you now, but you must promise not to get *fixated* (see what I did there?) on it and forget to read the blurb.

But it’s hard, I know. Because… 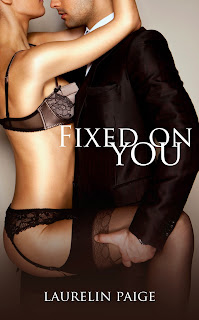 Now add a nightclub. Dark history. Obsessive love. And a name like Hudson Pierce.
Take a breath and add to Goodreads. Then bite your nails with me until July 31st!
Oh, you still want to know what it’s about?
Title: Fixed on You (Fixed, #1)
Author: Laurelin Paige
Genre: Contemporary
Age Group: Adult
Expected release date: July 31, 2013
Cover reveal organized by: AToMR Tours
Stalking and restraining orders are a thing of Alayna Pierce’s past. With her MBA newly in hand, she has her future figured out – move up at the nightclub she works at and marry the manager, David. He’s perfect for her because, although he’s attractive, he doesn’t get her all turned inside out and upside down like some other men have. It’s a safe plan, one that assures she’ll remain in control of her obsessive love disorder.
But what Alayna didn’t figure on is Hudson Pierce, the new owner of the nightclub. He’s smart, rich, and gorgeous – the kind of guy Alayna knows to stay away from if she wants to keep her past tendencies in check. Except, Hudson’s fixed his sights on her. He wants her in his bed and makes no secret of his plans to seduce her. Avoiding him becomes impossible after he offers a business proposition Alayna can’t turn down and she’s drawn further into his universe, unable to resist his gravitational pull.
Soon Alayna’s charmed by Hudson in every way possible and the control over her old behaviors slip. When she learns Hudson has a dark history of his own, she realizes too late that she’s fallen for the worst man she could possibly get involved with. Or maybe their less than ideal pasts give them an opportunity to heal each other and finally find the love their lives have been missing.
About the Author
Laurelin Paige is a sucker for a good romance and gets giddy anytime there’s kissing, much to the embarrassment of her three daughters. Her husband doesn’t seem to complain, however. When she isn’t reading or writing sexy stories, she’s probably singing, watching Mad Men or the Walking Dead, or dreaming of Adam Levine. She is represented by the wonderful Bob Diforio of D4EO Literary Agency.
Blog   Twitter   Facebook